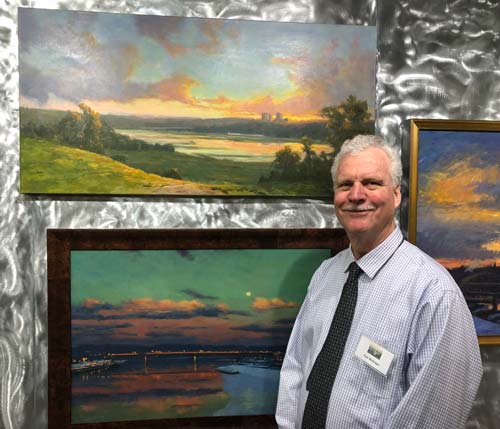 I took this photo of Tom McGregor at his January 17th, 2019 opening at Grand Hill Gallery

Tom McGregor paints with a prismatic color palette, a theory with roots in late nineteenth century French art. The prismatic palette consists of very intense, clean colors. He learned this color palette from Joe Paquet, who studied under John Phillip Osborne at the Ridgewood Institute. Osborne learned it from Arthur Maynard, who was trained by the renowned Frank Vincent Dumond of the Art Students League of New York.

Tom graduated from Minnesota State University, Moorhead in 1987 with a BFA in art and discovered plein air painting in 2007.

His painting style is described as “a form of realism with an affinity for the abstractions within nature.”

You can lean more about Tom at his website.