Edward Bock, mixed media artist and photographer, uses unexpected texture, colors, and mediums to create abstract paintings and fine art photography. Through his nuanced use of color, shape, and pattern, he creates art that invites viewers to step into his thought-provoking, unconventional version of reality.

Bock draws a large part of his artistic inspiration from his fascination with the shapes and movement found in the natural world. As a boy, he spent hours knee-deep in the swamps and creeks near his home in St. Louis, Missouri, collecting specimens and immersing himself in the sights, sounds, and sensations around him. His passion led him to initially focus on science-related classes in college.  But after attending an Introduction to Mass Communications class at the University of Miami, he became fascinated with filmmaking and photography.

Graduating with a Bachelor of Arts in Mass Communications with an emphasis in Filmmaking, he served in the U.S. Army as a motion picture photographer for informational documentaries. Bock went on to work for a private communications firm before launching his own multimedia and commercial photography business. In addition to his commercial work, he created original art by melding photographic images of patterns, textures and various subjects, experimenting with color palettes, exposure times, and image layering. Eventually, he introduced paint and other mediums to his artistic process, resulting in rich, multi-layered, abstract images.

Bock’s current works focus on exploring the relationships, interconnectedness, and influences of the living and physical world on each other. His art is included in both private and corporate collections and has been featured in multiple solo exhibitions. 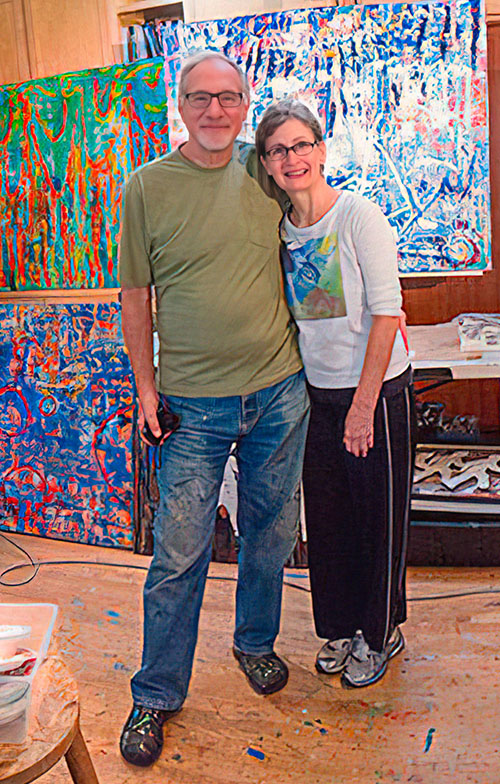 Edward Bock & his wife Mary in his studio.